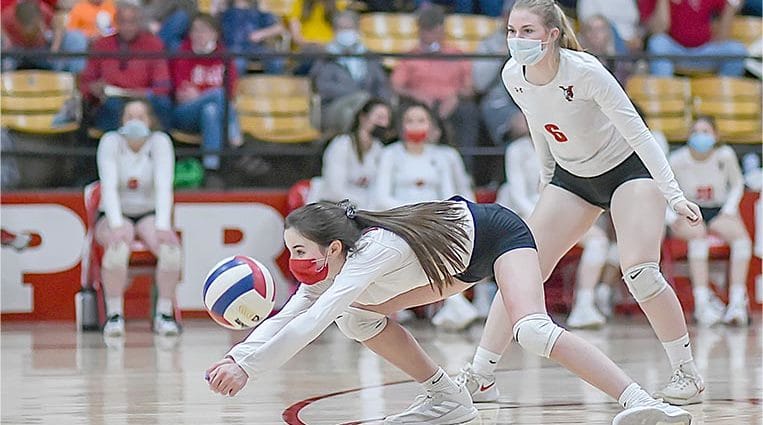 YHS volleyball rallies to regional, now one win away from state

Yuma High School’s volleyball, when all seemed lost, won their way into the Class 2A postseason.
Based on the Indians’ recent performances, they could prove to be a tough out when they compete in Region 3 at Meeker High School, Saturday.
“To make it into the tournament is remarkable,” head coach Jenny Noble said. “The girls are super excited.”

It is eerie how the volleyball squad is mirroring the girls basketball team’s postseason road. Like in basketball, the Indians are the 22nd seed in the 24-team postseason, rallying from lower in the depth chart in the final weeks of the regular season. The basketball team went to far-flung Soroco and Paonia for wins, before finally being dispatched in the state quarterfinals at Sanford.
Now the volleyball team is heading back to the hills, traveling 363 miles to Meeker for a regional showdown with the third-seed Cowgirls and 14th-seed Union Colony Prep. The Indians play Meeker at 11 a.m. Saturday. Union Colony Prepe, the 14th seed, also was supposed to compete in the regional, but had to bow out — meaning the winner of the Yuma-Meeker match will advance to state, set for May 12-13 at the Broadmoor World Arena in Colorado Springs.
Running their win streak to five would send the Indians, 6-8 entering regional, back to the state tournament for the 10th straight season.
It appeared last week would be the Indians’ final matches of the shortened Season C after losing at home to 1A contender Merino two weeks ago in The Pit, leaving them at 3-8 overall.
However, they showed flashes of their potential in that loss to Merino, the third seed in the 1A postseason, then showed more in knocking off Akron in their second match of the evening.
They then really turned it on in their final two matches, dominating Brush in The Pit last Thursday, then doing the same at Limon on Friday, ending the regular season on a three-match winning streak.
Suddenly, the Indians looked like true contenders with a chance of actually extending their season into May.
“After the Merino loss in our last triangular, I told the team we could choose to go 3-11 on the season, or 6-8,” Noble said. “I kept reminding them of that number, 6-8, as the number we had to reach to have any shot of making it to the next level. We beat Akron and improved to 4-8. Then on our senior night, we met up with Brush and got the win, going to 5-8 overall. With Limon sitting at No. 8 in 2A, we knew we had a tough team standing in our way. Their record was a little shaky, kind of like ours, so we knew they were beatable. We went in and played our best match of the season on their home court. It was great. It was a little bittersweet, just wondering if the win would even be enough to push us on to regionals. But we had achieved our goal of 6-8 and that’s the one part of the equation that we could control.”
After all the metrics were in, it became a reality early Monday afternoon when the regional brackets were released — the Indians were heading to regional for the 10th straight year, having won nine consecutive regional titles.
“It’s super gratifying to make it to the postseason and it was especially nerve-wracking waiting for each of the polls to update,” Noble said. “Then it seemed to take the CHSAA committee an unusually long time to send out the regional bracket, so the wait was fairly excruciating!”
It will be a serious challenge to advance to the shortened mid-week Class 2A State Tournament, May 12-13 at World Arena in Colorado Springs. Meeker finished 12-0 in the regular season, No. 1 in the 2A Rating Percentage Index (Yuma moved up to 28th) and No. 3 in the final 2A Top 15 coaches poll (CHSAANow.com).

“Both teams are going to be tough,” Noble said earlier this week, before news came that Union Colony Prep would not be competing. “Meeker relies heavily on one hitter, Emma Luce, with 290 kills — their next highest on the team has 60. That doesn’t mean that she’s their only weapon — they have a lot of aces, and our serve receive corp will be tested for sure on Saturday. Overall, I feel like they’ll be similar to Limon offensively, but substantially better defensively.”
However, the Indians have a legitimate shot if they can keep up their recent trend.
They easily could have swept Brush and Limon last week, losing comfortable leads in the first set both days but responding with three straight no-doubt wins to claim four-set wins.
Last Thursday against Brush was the Indians’ last match of Season C in The Pit.
Blessed with seven seniors, Noble chose to play only them in the first set.
The seniors played inspired ball, forging a 19-12 lead. However, Brush scored eight of the next nine points to tie it at 20, then scored four straight after Yuma took a 21-20 lead. The Indians rallied to within one, 23-24, but Brush escaped with a 25-23 win.
The Indians completely dominated after that, though, getting the “gentlewomen’s sweep” 25-13, 25-9, 25-17.
Suddenly displaying an impressive net attack, the Tribe ran out to a 10-3 lead in the second set. Elle Roth’s powerful spike gave Yuma an 18-10 lead, and Ema Richardson’s power boom put Yuma up 21-12. The win was capped by Lea Richardson’s serving ace, and Caddis Robinson’s tip for the winning point.
The Tribe kept it rolling in the third set, cruising to a 15-4 lead. It was 19-9 when back-to-back kills by Roth and Richardson sparked Yuma to score the last six points.
It was a bit tighter in the fourth set as the teams were tied at 11. However, the Indians kept battling, eventually taking a 20-16 lead, then scoring five straight points, capped by Gisele Gutierrez’s ace to secure the win.
Richardson recorded 17 kills, Roth 14, Mia Dischner five, Robinson four, Gutierrez, L. Richardson and Jayci Mekelburg two each, and Shelby Blach and Kaylee Etl one each. L. Mekelburg had 32 setting assists, and Mekelburg six. Roth and Mekelburg led in serve receive and digs. Roth was 17-17 serving with one ace, E. Richardson 13-14 with three aces, Gutierrez 12-12 with one ace, Dischner 11-14, L. Richardson 9-12 with two aces, Robinson 7-7 with one ace, Mekelburg 6-7, Julissa Garcia 5-6, Taylor Law 3-4 with one ace, and Kaylee Etl and Meidi Reyes both one good serve.
The win was a great way to finish the home schedule.

However, the postseason still was a long shot as the Indians traveled to Limon on Friday. The Badgers had struggled bit in the volleyball season after winning the 2A basketball title, but still were 7-6, featured plenty of talent and had played the toughest schedule in 2A according to opponents’ winning percentage (the Indians OPW was second).
Once again, though, Yuma came out firing on all cylinders. However, a disputed call that would have given Yuma a 16-6 lead in the first set instead resulted in a replay. Limon responded with a run that tied the score at 19. The Indians kept battling, taking a 22-21 lead on Roth’s kill, and tying the set again at 23, but Limon pulled out the final two points to hand the Tribe a 23-25 loss.
The Indians were undeterred from the disappointing loss, responding with three straight set wins, 25-17, 25-15, 25-22.
Another disputed call in the second set left Yuma leading only 15-14, but the Indians responded with five straight points, then capped the win on Dischner’s serving ace. They scored six straight in the third set for a 15-4 lead, and ran off another five straight points for a 21-6 lead. Limon, featuring some powerful hitters, made a little run, but the Indians eventually took care of business for the 10-point win.
The fourth set was close until Yuma scored six of seven points for a 16-10 lead. Limon got within two, 23-21, but E. Richardson came up with a big block for the 24th point, and Yuma closed out the win on the next volley.
The Indians continued to boom the ball at the net, as Roth finished with 20 kills, E. Richardson 14, Dischner eight, Reyes four, Robinson four, and L. Richardson two. L. Richardson had 40 assists, and Reyes four. Mekelburg, Roth, Law and Robinson led in serve receive, and Mekelburg, Roth, Robinson and L. Richardson were in double figures in digs. E. Richardson was in on seven blocks, Reyes three and Dischner two. Roth was 21-22 serving with six aces, Dischner 19-20 with three aces, E. Richardson 15-15, Reyes 13-14, Robinson 13-13 with two aces, and L. Richardson 8-12.
And now, suddenly, the Indians find themselves back in the postseason.
“I don’t know why we were so slow to get going (in the season),” Noble said. “I just hope we continue the upswing. I think some of it is just the personality of the girls on the team. We have a lot of athletes who aren’t necessarily comfortable being vocal and are a little more passive by nature. It can take time for a leader to emerge and for the individuals on the team to get going toward common goals. Hopefully we are moving past the awkward stage and can really focus on making it to state.”

LPAA regional
The Lower Platte Activities Association is going to be well represented in the Class 2A and Class 1A regional volleyball, this weekend as six of the league’s nine teams are still playing.
Wiggins is the top seed in 2A, hosting Dawson School and Olathe on Saturday. Sedgwick County is the fourth seed and will host Heritage Christian and Sargent. Holyoke is the ninth seed, playing at Vail Mountain and also taking on Telluride. Yuma is the 22nd seed and will play at third-seed Meeker against the host school and Union Colony Prep.
In 1A, Merino is the third seed and will host Elbert and Flagler, and Haxtun is the 18th seed traveling to Briggsdale to take on the home team and Kit Carson.