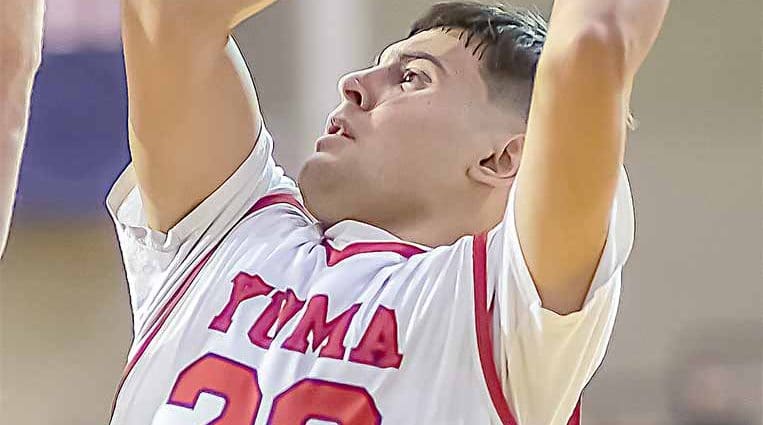 Yuma boys head to the hills

Yuma High School’s boys basketball team could not capitalize on being the top seed in district.
Because of that, their punishment is having to take a trip to picturesque Vail for regional action this weekend.

“Our region is set up well for us,” head coach Dave Sheffield said. “I like our match up with each of the teams in the region. At this point in the season though, it doesn’t matter who or where we play. We simply need to take one game at a time and maximize what we have and we will go where we want to.”
The Indians managed a total of 68 points in two games last week while finishing third in the Class 2A District 2 Tournament, at the Bank of Colorado Events Center on the NJC campus in Sterling.
They now have to make the trip up the crowded — but visually beautiful — I-70 corridor to play regional at Vail Mountain in one of Colorado’s most renowned resort towns.
Vail Mountain, a college preparatory school that is 30th in the RPI, upset neighbor Vail Christian for its district championship, earning a right to host 2A Region 8 this weekend.

Vail Mountain’s gym reportedly is not big enough to host a four-team regional. However, school officials could not secure another gym in the vicinity, so it still will be held at Vail Mountain School. Meeker and Clear Creek — another pair of mountain I-70 schools — comprise the rest of the Region 8 field.
The first game, between ninth-seed Yuma and 24th-seed Meeker is set for 4 p.m. Friday. The second game, between eighth-seed Vail Mountain and 25th-seed Clear Creek is not until 7, in order to give plenty of time for fans to clear out of the gym and parking lot prior to the next game.
Yuma has hosted regional the past two years, advance to the 2A Great 8, and winning back-to-back state championships.
However, because of last Friday’s 32-29 loss to Holyoke in the District 2 semifinals, The Pit at YHS will be dark and empty this weekend.
Instead, the Indians will be by the famed Vail ski slopes battling a Meeker Cowboys squad that is 12-10 after losing to Vail Mountain in overtime in their district championship game last Saturday. The Cowboys had beaten Soroco and Plateau Valley to reach the district final.
Vail Christian was the top seed in that district, but was upset by Vail Mountain (which had lost to Vail Christian twice by 20 or more points earlier in the season) in the semifinals, 53-47.
However, Yuma first must worry about 24th-seed Meeker. The Cowboys, from a well-renowned football school, no doubt will test the Indians’ toughness Friday afternoon.
“We have a lot of information/film on Meeker,” Sheffield said. “They will look to push the pace, and they move the ball well. They have three players averaging double figures, so we are going to have to be efficient defensively.”
Clear Creek is an even 11-11 after finishing fourth in its district last week, beating Byers in overtime before losing to Denver Christian in the semifinals and Burlington in overtime in the third-place game.
The winners will meet Saturday at 1 p.m. for the privilege of advancing to the 2A Great 8 next week at the Budweiser Center in Loveland.
Yuma appeared to be a good bet to be a regional host entering into district after capping off its third straight 8-0 run through the LPAA.
However, the Indians’ season-long inability to score consistently eventually caught up to them in the district semifinals, last Friday in Bank Colorado Events Center on the NJC Campus.
Sophomore Clay Robinson, among the team’s top two scorers along with senior Chase McCreath, missed the game due to injury. Senior Jonathan Rascon then left the game in the second half after rolling his ankle.
Yuma managed only 17 points in the first half, but still led by five at the intermission.
However, the Indians scored only 12 points in the second half. They led the whole game, but Holyoke — whom the Indians had beaten easily twice during the regular season — eventually caught up and held on for the 32-29 upset.
Yuma shot 27.3 percent from floor, and made only one of seven 3-point attempts. The Indians also shot just 50 percent from the charity stripe, making eight of 16, which proved fatal down the stretch. Plus, they had only two assists and were outrebounded 32-26, including Holyoke pulling down 11 offensive rebounds. It is not like Holyoke was much better, shooting 26.7 percent, but the Dragons made seven of eight free throws and recorded nine assists.

“This past weekend presented a variety of adversity with injuries and illness,” Sheffield said. “The ball tended to stick at times and we didn’t attack the defense on various opportunities, which led to a single-faceted offense. This has happened a couple times this year. We need to put a lot of focus on offensive fluency this week and get back to simply playing basketball this weekend. Our team is at its best when they have great ball movement with various players getting touches, which allows us to exploit the defense’s weaknesses.”
Chase McCreath was the only Indian to finish in double figures, recording a double-double with with 16 points and 12 rebounds. Rascon had seven points and two rebounds before leaving with his injury, Rolando Caraveo three points, three rebounds and three steals, Preston Blach two points, Javier Gamboa one point and four rebounds, Beau Tate four rebounds, and Cade Morton two assists.
Robinson was back in the lineup Saturday in the third-place game against Sedgwick County, which had lost to eventual-district champion Wray in the other semifinal, while Rascon sat out the game with his injury.
Robinson scored the game’s first five points. McCreath and Caraveo each hit 3-pointers as Yuma took an 11-2 lead, but Sedgwick County scored four straight to end the quarter.
Yuma scored only two points in five minutes of game time, but Caraveo’s trey and Robinson’s putback right before the buzzer kept Yuma ahead 18-10 at halftime.
Yuma kept its lead between eight and 12 points throughout the second half, eventually claiming a 38-25 win.
The Indians shot a bit better, finishing at 39.4 percent from the floor, made three of six behind the arc, and shot 69 percent at the charity stripe, making nine of 13. They had eight assists and eight steals, and held a 28-24 rebounding advantage.
McCreath and Robinson accounted for 30 of Yuma’s 38 points. Robinson had a double-double with 15 points and 11 rebounds, McCreath 15 points, eight rebounds and four blocks, Caraveo six points, three rebounds, three assists and three steals, Gamboa two points, and Blach three rebounds and two assists.