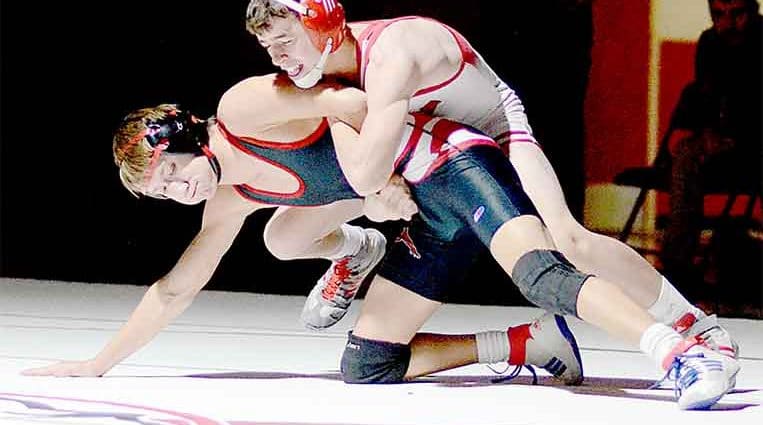 A busy and successful January continues for the Yuma High School boys wrestling team.
The Indians had another great tournament run last Saturday, finishing second in the team standings at the Wiggins Invitational.

They now get to wrestle on the home mat today, January 23, as they host a triangular with Lamar and County Line beginning at 5 p.m. in The Pit. They continue their Saturday tournament schedule two days later at Northglenn High School.

Yuma has shown throughout the season they have quality wrestlers throughout the lineup. It was on display again last Saturday in Wiggins. The Indians had 11 placers, including two champions, and scored 154.5 points, behind only Lyons with 163. Rounding out the top five were Wiggins with 110 points, Northridge with 91 and Byers with 83.
John Smith won his second straight tournament title at 113 pounds. The sophomore earned a pair of first-period pins in the quarterfinals and semifinals over Lyons’ Xander Keelick (1:13) and West Grand’s Dane Biekert (1:43). Smith then ran into Northridge’s Clay Alexander in the championship match, dominating his way to an 11-4 decision.
Blaze Brophy picked up his first tournament title of the season at 132 pounds. The junior won by fall (1:57) over Valley’s Jose Rivera in the quarterfinals, then earned an 8-0 major decisoin over Longmont’s Michael Barone in the semifinals. He met up with Lyons’ Christian Keller in the championship match, working his way to a 6-2 decision.
Alec Holtorf made it to the finals at 120 pounds, finishing second. He won by all (2:32) over Byers’ Colton Dennison in the semifinals. The senior came close to getting a tourney title, losing a 4-3 decision to Longmont’s Bini Barila.
Joey Ross placed second at 145. He beat teammate Will Marshall in the quarterfinals, then battled to a 7-5 decision against Longmont’s Eric Wagner in the semifinals. Lyons’David Gardner was waiting for him in the championship match, handing Ross a 6-0 loss.
Louden Blach went 3-1 while placing third at 160. He won his quarterfinal, lost in the semifinals, then came back with two more wins, including an 8-4 decision over Littleton’s Nicklaus DeShon in the third-place match.
Braden Smith took third at 126. He won his first two matches to reach the semifinals. He lost by fall, but came back with two more wins, capping his day with an 11-4 decision over Gilpin County’s Kamron Brewer for third place.
Cayden Lynch was in a round robin at 182, going 2-2 to place third.
Lars Sims went 4-1 while placing third at 285. He won his first two matches to reach the semifinals, where he lost by fall late in the third period. Sims bounced back with two wins, including pinning teammate Brandon Mendoza in the third-place match. Mendoza went 3-2 while placing fourth at 285. Jose Ruiz went 2-2 to place fourth at 195. Will Marshall won two matches at 145 and Tyler Allen won twice at 152. Josh Daugherty and Maddox Hisam both wrestled in a round robin at 126, with Daugherty getting one win. Zeke Martinez wrestled at 152.
Girls roll at Loveland
Yuma High School’s girls wrestlers get a break before heading into the postseason.
However, they are on such a roll they might just want to keep going.
The Indians again had several placers, and another champion, last Saturday in Loveland. They get this weekend off before competing in regional. Girls wrestling has become so popular this year that regional, and the state tournament, are being expanded into two-day events. (Some of them might have matches during the triangular with Lamar and County Line that YHS is hosting today, January 23.)
Yuma scored 72 points in Loveland. The girls tournament was paired up with a boys JV tourney, and team points were combined together, so it was tough to determine where the Indians finished among girls teams, though head coach Rory Lynch said they likely were among the top two.
Sophomore Mia Dischner was No. 1 again. She usually wrestles at 182, but that weight was combined with 215. That did not deter Dischner as she earned a 9-0 major decision over Severance’s Kinsey Nylander. She then met up with Platte Valley’s Kayden Mieres, winning in “sudden victory” in overtime to claim first place.
Fatima Duran placed second at 111. She won her first four matches, including three by pin (one in 27 seconds and another in 31 seconds). She wrestled tough in her final match, dropping a tough 2-0 decision to Audrey Bankes of Loveland.
Eva Ruiz took third at 161. She won her first three matches, the first two by fall, before getting pinned in her last two. Abril Montes de Oca went 2-2 at 127, Maci Daugherty won one match at 100, Ashley Marshall one win at 105, Ximena Garcia one win at 118, and Alejandra Barron one win at 136, as all the Yuma wrestlers came away with at least one victory.