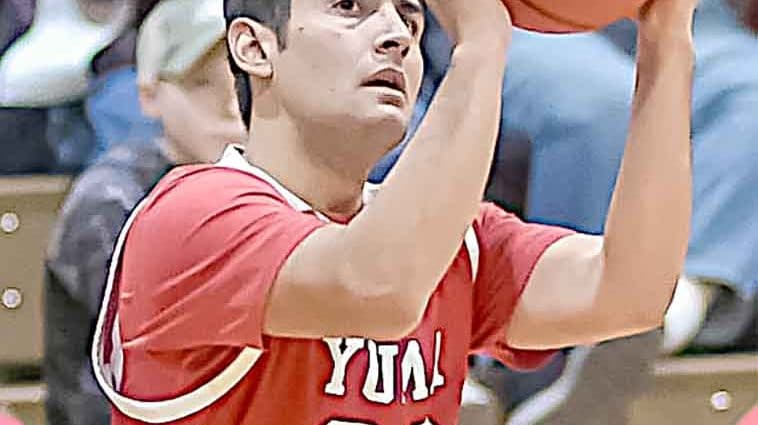 Things are looking good at the moment for the Yuma boys basketball in the league race.
However, coming is the nonleague stretch against the Nebraska teams.
The Indians improved to 8-1 overall, 2-0 in the Lower Platte Activities Association, with a league win at rival Wray last Friday, followed by a non-league home win over Burlington the next afternoon.

They have another league game Friday when they host the Wiggins Tigers in The Pit. Wiggins scored only 22 points in a 17-point league loss at Sedgwick County, last Saturday. However, the Tigers have been more competitive this season than in recent campaigns.

“They’re improved,” Yuma coach Dave Sheffield said. “They’re .500 right now. That’s a conference game, so we need to take care of that one first.”
The Indians are at the top of the league standings with Sedgwick County, whom they will host in The Pit on February 1.
“We’re kind of where we want to be right now,” Sheffield said.
Following Friday’s game, the Indians will travel north into Nebraska to take on the Sidney Red Raiders. They also will play at Chase County in Imperial in a couple of weeks. Those were the only two teams to beat Yuma during its championship season last year.
Sidney entered this week with only one win, but also had a losing record last year when they came into The Pit and surprised the Indians, snapping the program’s 31-game winning streak.
“They were 3-10 last year,” Sheffield recalled. “They are athletic. Every game we’re going to get everyone’s best.”
Despite not losing since mid-December, the Indians were knocked out of the top spot in the Class 2A Top 10 (CHSAANow.com polls) this week, dropping to No. 2 with the Highland Huskies, whom they beat in the 2A championship game last year, the new No. 1. The polls do not really matter, though. It is the Rating Percentage Index that dictates seeding in the postseason, and in that ranking the Indians were all the way down at No. 11 as of this past Tuesday.
There is a lot of basketball left to be played, though, and the Indians will find themselves climbing the RPI if they continue to win at the current clip.
Yuma gave itself some separation from its ancient rival in the league standings with a slow-paced 40-28 win at Wray, last Friday.
“I thought at Wray our defense contested each shot, outrebounded them and managed the pace real well,” Sheffield said.
Wray averages about 70 points per game, but the Eagles did not seem interested in pushing the pace last Friday.
There was good bounce to the game early on as Yuma took a 10-6 lead. However, it all slowed down after that, leading 14-9 at the end of the first quarter.
It got really rough in the second as Yuma scored just three points. Wray scored only five, as Yuma still led 17-14 at halftime.
“We got stagnant in the second quarter,” Sheffield said. “We just stopped moving the ball.”
IMG_4717.MOV
However, they got it going some in the third, going on a 10-2 run for a 27-16 lead. It slowed down again over the last four minutes of the quarter, with Yuma leading 30-20 going into the final stanza.
Wray was within six, 32-26 when Jonathan Rascon hit a 3-pointer, followed by Chase McCreath scoring off an offensive rebound for a 37-26 lead, and effectively seal the win for Yuma.
Wray shot just 26.5 percent from the floor, including missing all 13 of its 3-point attempts. Yuma was not much better at 41 percent, made four of 13 treys and made just four of nine free throws. The Indians did dominate the boards, 32-16.
McCreath was the only player in the game in double figures scoring, finishing with 16 points to go along with six rebounds and two assists. Javier Gamboa had seven points, five rebounds and two steals, Rascon six points and five rebounds, Rolando Caraveo five points, four rebounds and three steals, Clay Robinson four points, nine rebounds and four assists, Preston Blach two points, and Cade Morton two rebounds and two steals.
The Indians were home the next afternoon for a non-league game with Burlington, winning 54-40.
The Cougars jumped out to a 9-3 lead, but the Indians responded with a 9-0 run. Robinson returned to the floor after getting treated for a shot to his nose, and caught fire in the second quarter, along with McCreath hitting a rare 3-pointer as Yuma opened up a 33-19 lead by halftime.
The deficit simply stayed around that margin the whole second half.
Yuma shot 47 percent and made seven 3-pointers, and held a 30-19 rebounding advantage.
Three Indians finished in double figures, led by Robinson with 16, along with 10 rebounds for a double-double. He also had three steals and three assists. McCreath also had a double-double with 14 points and 11 rebounds, along with four assists and three blocks. Rascon had 10 points, Gamboa five points, Morton four points and two rebounds, Caraveo three points and three steals, Creighton Eyring two points and three rebounds, and Bryson Castillo one rebound.