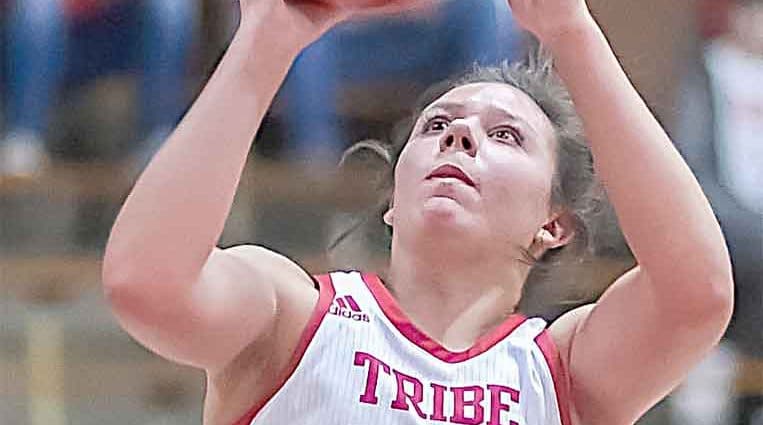 There is still a lot of basketball left for the Yuma High School girls team to reach their peak.
“We’re a young team, still learning how to play together,” head coach Bob Rahm said. “We’ve got the talent, we just need to put it together at the right time.”

The Indians are 4-5 overall, and 1-1 in Lower Platte Activities Association play, after losing a league game at rival Wray last Friday then beating Burlington in a non-league home game the next afternoon. They finally dropped out of the Class 2A Top 10 (CHSAANow.com polls) this week, and found themselves sitting at No. 30 in the Rating Percentage Index as of this past Tuesday.
The Indians return to league play Friday when they host Wiggins in The Pit. The Tigers are 6-4 overall, but 0-1 in LPAA play after losing to Sedgwick County, which is now 2-0 in league play.

Rahm said Wiggins does not have a lot of height, so it should be a good match-up for the Indians. They will face a very difficult task on Saturday when they cross state lines to go play a quality Sidney, NE, squad that entered this week 11-4. The Red Raiders have a tall lineup, including one player that has signed to play college volleyball at South Dakota.
Among the LPAA’s 2A teams, Holyoke and Wray look to be the favorites to wrest the league title away from the Indians. However, Rahm said he holds out hope the Indians can win the league title as they still have a LPAA game with Holyoke, and need to take care of business in their other league games, though 1A Merino also is looking tough.
The coach also noted the Indians, which have been a dominant program in 2A for the past eight years, get every team’s best shot. “Everybody gets pumped up for us,” Rahm said.
He has a young team, though, that has at times flashed its long-term potential.
It was a tough go in the Eagles Nest last Friday, however, against a Wray team that also plays several underclassmen.
Things were looking good in the early going as Meidi Reyes’ 3-pointer gave Yuma a 17-15 lead midway through the second quarter. Ema Richardson’s basket gave Yuma a 19-17 lead a short time later, but she picked up her third foul with 1 minute left in the half, and Wray closed on a 4-0 run for a 21-19 halftime lead.
Yuma did take a 25-23 lead early in the third. Wray went on a run after that, though, to get some separation from the Indians.
“There was just that one little stretch where they converted on their end and we didn’t,” Rahm said. “It became a 10-point game in a hurry.”
Wray pushed its lead to as much as 13 points, 42-29, in the fourth. The Indians kept battling, trimming the lead to five, but there was little time left by then, and Wray went on to claim the 44-37 win.
“They play well against us and we certainly didn’t play as well as we’re capable of,” Rahm said.
Richardson finished with 20 points and seven rebounds. Reyes made all three of her shots beyond the arc for nine points, along with two rebounds. Reagan Nolin had four points, two rebounds and four steals, Lea Richardson three points, one rebound and one steal, Elle Roth one point, four rebounds and three assists, Lainey Mekelburg three rebounds and two steals, and Taylor Law three assists and two rebounds.
Yuma was back on its homecourt the next afternoon against a winless Burlington squad. The Indians had blown out the Cougars at the Topside Tipoff in December.
However, Burlington was not about to let that happen again, and played well throughout Saturday’s game. Yuma eventually pulled away to a 72-55 win, but definitely had to earn it.
The Indians led early, but Burlington rallied for a 15-14 lead. Yuma regained the lead in the second quarter, fell behind again, then made a run powered Roth to open up a 39-27 lead.
Yuma kept extending its lead in the third, as a Kelly Gardner 3-pointer gave the Indians a 51-37 lead. Nolin opened the fourth by knocking down two treys for a 61-45 lead, and the Indains led by as much as 22 before settling for the 17-point win.
“Burlington didn’t play like an 0-9 team,” Rahm said. “If they played like that all the time, they’d probably have at least three or four wins.”
E. Richardson had 24 points and nine rebounds. Nolin made three of four from behind the arc, finishing with 23 points, four rebounds, three steals and two assists. Roth had her best all-around game of the season as the sophomore made five of eight shots, finishing with 13 points, eight rebounds, three assists and two steals. Gardner had five points and one rebound, Reyes three points and four assists, Mekelburg two points and two rebounds, Samantha Wells two points and one rebound, and L. Richardson seven rebounds and six assists.