Wrestling returned to The Pit, Thursday night.
The mats were rolled out on the venerable old gym’s floor for the first time in nearly a year as the Yuma High School wrestlers opened their shortened Season B with a sweep of Highland and Sterling in a triangular hosted by the Tribe.

The Indians took on Highland in the night’s first dual with a 33-30 win.
Yahir Trejo claimed a 9-6 win at 160 pounds, and Brandon Mendoza won by fall at 285. Winning by forfeits were John Smith, Braden Smith, Kevin Hermosillo, and Kallen Blach. Blaze Brophy lost a close decision, 5-4. Zeke Martinez had a good battle in his match before getting pinned in the third period. Louden Blach was pinned, and Jose Ruiz lost by decision, 5-1.
The Indians had a break before getting back on the mat again, closing out the triangular with a 45-33 win over Sterling. 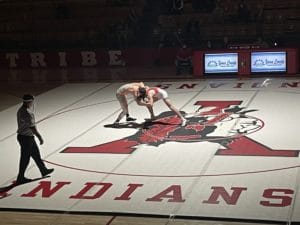 Hermosillo cruised to a 13-5 win. Mendoza got another pin, this one in the third period., and J. Smith won by fall in the first. B. Smith suffered a tough 1-0 defeat, and Trey Stegman, Martinez and Able Perez lost by fall. Getting forfeit wins were Will Marshall, L. Blach, K. Blach, and Ruiz.
The wrestlers are on the road to Eads on Saturday for a triangular, while the girls team opens its season at a quadrangular at Doherty High School.