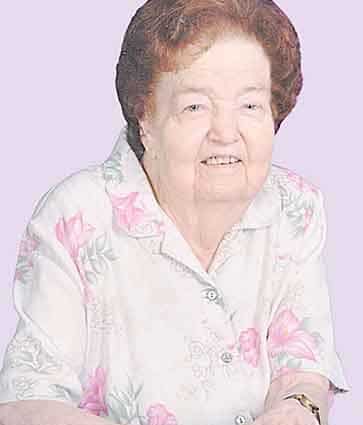 Luetta Clarice Dressel was born on June 3, 1923 in Washington County, Colorado and departed from this life on January 9, 2020 at Harmony Home in Yuma, Colorado.

Luetta gave birth to their first child, Colleen Sue on April 7, 1945 while Lloyd was serving in the Army in WWII. She lived with her parents until Lloyd was discharged. Lloyd and Luetta welcomed a son, Phil Armen to the family on July 23, 1948. On January 8, 1955, a second daughter Susan Marie was born. Their second son, Arlin Lloyd completed their family on April 7, 1963.

In 1964, Lloyd began a new career at M & M Co-op elevator and the family moved to 600 S. Elm, Yuma, CO. Luetta was a stay-at-home mom for a few years until she became employed at Yuma District Hospital where she worked for the next 29 years. They were reluctant to let her retire as she delighted the hospital staff with her delicious cookies.

Luetta was a member of South Burdett Extension Club and enjoyed exhibiting her fine embroidered pieces and cakes at the Washington County Fair.

She was a life-long member of St. Johns Lutheran Church in Yuma, CO and was a member of Mary Martha Guild and Ladies Aid.

Especially during their retirement years Lloyd and Luetta took great pride in their home, both enjoyed the garden and the many flowers they grew. They were especially close to their next- door neighbors, Don and Shirley Starnes. Most Sunday evenings you can find them dining at Woodies Drive-In.

Luetta continued to live at their home after Lloyd passed away on June 15, 2009. In November of 2012, she moved to Parrish Care Assisted Living in Yuma. You could always find her putting together 300- piece jigsaw puzzles and playing bingo. She enjoyed the company of the other residents there particularly Joy Boltjes, Ruth Beethe, and Betty Lassen.

A funeral service was held on Wednesday, January 15, 2020 at St. John’s Lutheran Church in Yuma, CO with Rev. Dennis Fitzpatrick officiating. Baucke Funeral Home has charge of the final arrangements.