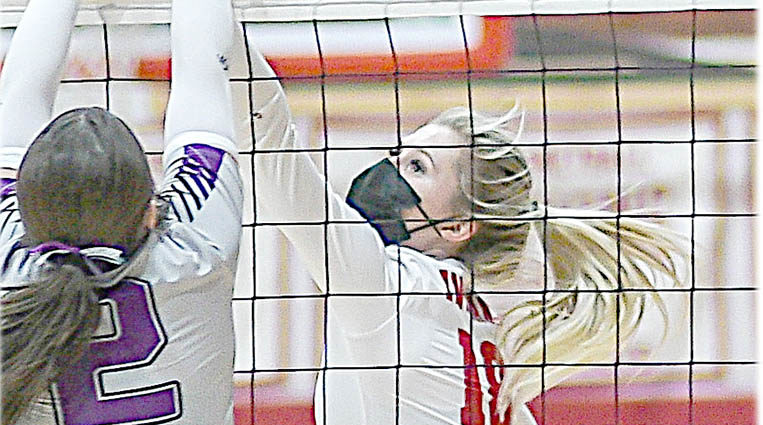 It has been an uneven start to Season C for the Yuma High School volleyball team.
The Indians fell to 2-5 overall, 1-3 in the Lower Platte Activities Association, after losing to Haxtun and Sedgwick County, Thursday in Haxtun. In both matches, the Indians lost the first two sets, won the third, then dropped the fourth.

They were Yuma’s only matches this week, with its next matches not until late next Friday at Caliche.
“It will be nice to have a few days of practice in a row next week,” Noble said. “We have a laundry list of things to work out and perfect, so it’ll be nice to be able to dedicate some time to each of those things. We’ll continue to work on serve receive, consistency offensively, making good choices and not giving points away.”

She noted the Indians opened the season last week with five matches in three days — two last Thursday and three on Saturday — representing more than a third of the 14-match season.
“We are starting some young players in key roles, and there is an adjustment period that goes along with that,” Noble said. “We normally have the luxury of playing single games on each date and that gives you time to adjust things at practice before the next match…The adjustments are all made in real time and on the spot. No waiting until practice to fix this or that. It’s super demanding on the players, whether a seasoned veteran or a rookie, but the strides we are making are huge.”
Yuma opened its season last Thursday at home with a triangular against third-ranked Wiggins and rival Wray. Many of the players had about one week of practice after the conclusion of the basketball season, and they were opening against an excellent Wiggins squad.
The end result was predictable, a 20-25, 14-25, 21-25 loss to the Tigers.
Yuma fell behind early in the first set, but battled back to a 20-20 tie before eventually losing. The Indians held an 8-3 lead in the second set, but Wiggins went on a big run to take a 17-10 lead and it was all Tigers after that. The Indians again battled in the third set, leading 13-9, but Wiggins came back for a 15-14 lead. The Indians did make one last rally, getting to within two, 21-23, but Wiggins closed out the deal.
Statistics from the match were not available due to technology issues.
Wiggins then cruised past Wray, which also had some of its players just come off the basketball season in which the Eagles finished as the 2A state runner-up.
The evening concluded with Yuma sweeping past Wray, 25-17, 25-21 and 25-20.
Yuma led just 18-17 in the first set before scoring the last seven points. The Indians trailed 9-13 in the second set, but eventually took an 18-17 lead on Elle Roth’s service ace, eventually pulling out the four-point win. They again trailed in the third set, 6-10, but again went on a run with Gisele Gutierrez’s kill giving the Indians a 15-13 win. Another Roth ace made it 21-15, and the Indians closed out the sweep.
Roth recorded 11 kills, Caddis Robinson eight, Ema Richardson six, Meidi Reyes two, Gutierrez two, and Mia Dischner two. Lea Richardson had 17 setting assists, Robinson eight, and Julissa Garcia four. Jayci Mekelburg and Roth led in digs and serve receive. Robinson was 16-18 serving with six aces, E. Richardson 13-14 with one ace, Roth 11-12 with four aces, L. Richardson 10-13 with four aces, Dischner 8-8, Lyndsey Mekelburg 2-3, Reyes 2-2 and Gutierrez 2-2.
The Indians had Friday to practice before heading south to the Kit Carson Tournament, early Saturday.
They first ran into the Wiley Panthers, losing in four sets, 15-25, 10-25, 29-27, 21-25, improving as the match progressed.
E. Richardson was 19-20 serving, L. Richardson 13-14 with one ace, Robinson 13-14 with one ace, Dischner 9-9 with one ace, Roth 9-10, L. Mekelburg 7-7, and Reyes 2-2. Roth recorded 19 kills, E. Richardson eight, Robinson six and Reyes three. L. Richardson had 32 setting assists. Roth, J. Mekelburg, Shelby Blach, L. Richardson and Taylor Law had strong efforts in digging and serve receive.
Yuma then was tasked with taking on Class 1A power Fleming, losing in straight sets, 16-25, 17-25, 11-25.
There was not much offense as Robinson had six kills, Roth four, E. Richardson three and L. Mekelburg two. L. Richardson recorded 15 setting assists. The Indians served only 86.7 percent. Robinson was 10-10 with two aces, L. Richardson 8-10 with one ace, Dischner 7-7, Roth 5-6, E. Richardson 6-8, and L. Mekelburg 3-4. J. Mekelburg and Roth were strong in serve receive with only four errors out of 44 chances between them.

Yuma finally got back on the winning track in its cross-pool match against the Holly Wildcats. The Indians enjoyed a dominating sweep, 25-15, 25-20, 25-15. The attack recorded 39 kills, with 15 from Roth, 14 by E. Richardson, four from Robinson, two each from L. Richardson and L. Mekelburg, and one from Gutierrez. L. Richardson had 28 setting assists. Yuma served 92 percent from the line, as Robinson was 19-20 with three aces, E. Richardson 13-14 with three aces, Roth 11-11 with one ace, Dischner 9-10 with one ace, L, Mekelburg 8-8, and L. Richardson 4-6.
Noble said that, overall, it was a fairly-encouraging busy start to a short season.
“Our athleticism is exciting, and when we start putting all the phases of the game together, great things are happening,” she said. “Despite dropping a few matches, I’m super happy with what we’ve accomplished and we’re only going to get better over time.”