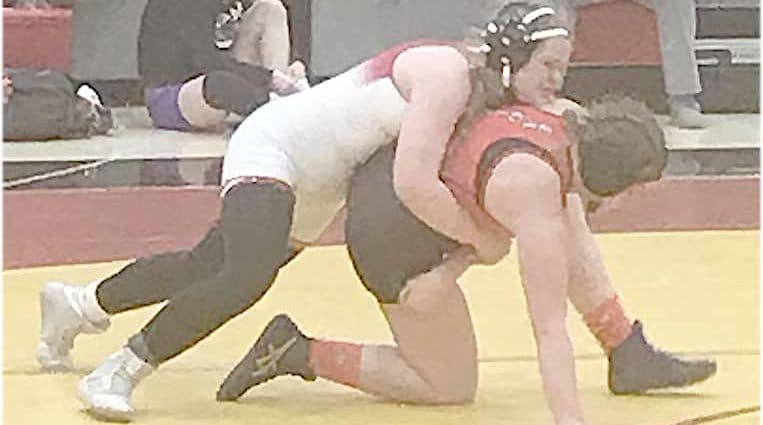 YHS has one in girls state wrestling

Mia Dischner has made Yuma High School sports history.
She qualified last week at regional for the Colorado Girls State Wrestling Championships, which will be held today, March 11, in Pueblo.
“(Dischner) has a chance to make the finals for sure,” head coach Kyle Newton said.

Dischner and three of her teammates qualified for last year’s state tournament.
However, this is the first year girls wrestling is an officially sanctioned sport in Colorado, making the junior the first to compete in a “sanctioned” state tournament.
It was tougher to qualify this year with less state berths on the line — the top four placers in each weight at two regionals earned trips to state.
Dischner did so by placing third at 185 pounds, last Saturday at the regional held at Coronado High School.
The 2021 state tournament is a one-day event, held at the Southwest Motors Event Center on the Colorado State Fair Grounds in Pueblo. The one-classification tournament begins at 2 p.m.??. One can watch on the NFHS Network, which requires a paid subscription. Each weight has an eight-wrestler bracket.
Dischner takes a 15-3 record into the state tournament. Her first match is against Cree Moo of Far Northeast, a junior with a 16-7 record.
Overall, the Indians had a good run at the two-day Region 2. They scored a total of 45 points to finish 11th out of 22 schools. Chatfield won the regional team title with 130.5 points.
Half the weights competed on Friday, the other half on Saturday.
Fatima Duran nearly earned a state berth on Friday, placing fourth at 111. She did not qualify, though, as she lost a challenge match. The junior earned a bye into the quarterfinals, where she lost by fall to Mesa Ridge’s Isabella Cross. Duran rallied in the consolation bracket, winning by fall over Eaglecrest’s Vianca Mendoza, then winning by fall over Vista Ridge’s Angelique Norman.
That got her into the third-place match, where she was pinned by Chatfield’s Journey Ruiz, finishing fourth. She ended up having to be in a challenge match, losing that and a state berth.
Also on Friday, Destiny Henderson competed at 118, and Maci Daugherty at 127. Both lost in the first round and were eliminated.
Three more Yuma wrestlers competed on Saturday, led by Dischner’s third-place effort at 185. She got a 45-second pin in the first round over Durango’s Bridget Henry. She followed that with a first-period pin of Manitou Springs’ Hannah Hollick-Mitchell in the quarterfinals.
Dischner made a great effort in the semifinals, eventually losing by fall to Chatfield’s Isabel Garcia in the final minute. However, she recovered to win by fall over Alamosa’s Ciara Dodds in the consolation semifinal, then punched her ticket to state with an exciting 6-5 decision over Eaglecrest’s Blythe Cayko in the third-place match.
Eva Ruiz came home as the fifth-place finisher at 161. She got a 24-second pin in the first round over Lewis-Palmer’s Riley Kapels. She lost by fall in the first period in the quarterfinals, but earned an exciting sudden victory, 5-3 over Fountain-Fort Carson’s Arabella Quintanilla in the consolation first round. Ruiz was pinned in the consolation semifinals, but finished the day with a win by fall over Vista Ridge’s Paige Faler in the fifth-place match.
Abril Montes de Oca competed at 147 pounds, losing by fall in the first round.