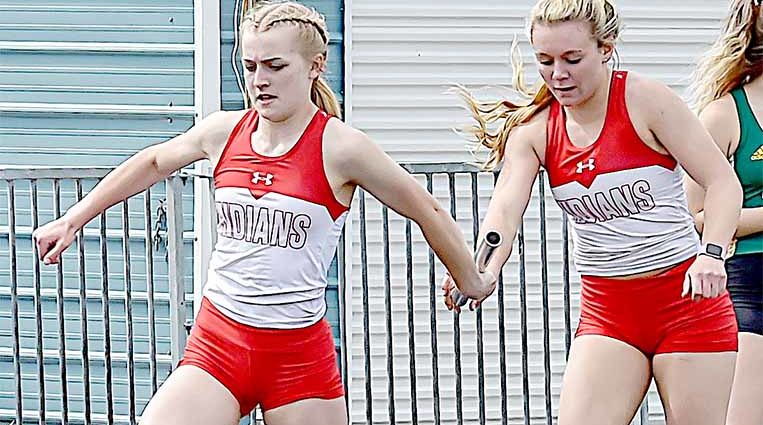 YHS track ready for big run at 2A Championships

Yuma High School’s track and field teams are taking large contingents to the Class 2A Track and Field Championships, today through Saturday, at Jefferson County Stadium in Lakewood.
The Indians will have their sights set on high team finishes for both the boys and girls as they compete in multiple events.
“I think I am more excited than anything because I think our boys could score pretty high in the team points,” head coach Lucas Lubbers said.

This will be the first state track and field meet since 2019, when it was condensed into two days due to rains.
Yuma’s boys team in particular has the potential to make a run at a team championship, ranking at or near the top in 2A in several events.

The boys team is taking nine athletes to compete in 11 events, while the girls are taking seven in six events.
Clay Robinson is the top seed in the 100- and 200-meter dashes. The prelims are today. Daman Thornton is in the 400 dash, with its prelim today.
Beau Tate is highly ranked in the 110- and 300-meter hurdles. The 110 prelims are today, and the 300s are Friday. Nash Richardson also is in the 300 hurdles.
Yuma’s boys are the top seed in the 4-by-100 relay (Alex Lozano, Tate, Kail Cooper and Javier Duran ) and the 4-by-200 relay (Duran, Lozano, Cooper and Thornton). They are the second seed in the 4-by-400 relay (Thornton, Tate, Duran and Cooper). The 4-by-200 prelims are today, and the other two relays prelims are on Friday.
Jaxson Lungwitz is the top seed in the triple jump, which will be held today. Cooper and Braden Smith are the top two seeds in the pole vault, which will be held today, and Richardson is 11th. Robinson also will be in the long jump on Saturday.
Julissa Garcia is the fourth seed in the 100 dash, and also is in the 200. Both prelims are today.
Yuma’s girls are the third seed in the 4-by-100 (Lyndsey Mekelburg, Lea Richardson, Garcia and Caddis Robinson), with its prelim run on Friday. The Indians are in the 4-by-400 relay (Ashley Ibanez, Hailey Eyring, Shelby Blach and Richardson), with its prelim on Friday, and the 800 sprint medley (Mekelburg, Robinson, Garcia and Richardson), with its prelim today. The foursome of Eyring, Ibanez, Richardson and Blach are the third seed in the 4-by-800 relay, with its final being run today. It is the only racing final today involving Yuma athletes.
Nearly all racing finals will be held on Saturday. Some are being run on Friday, such as the 800 sprint medley.
“I am just hoping they go have some fun,” Lubbers said of YHS track and field qualifiers.